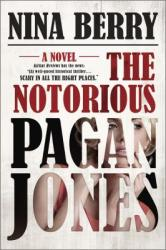 After a tragic accident she caused that led to the death of her father and sister, teenage Hollywood star Pagan Jones has a second chance at life when the mysterious Devin Jones shows up at Lighthouse Reformatory for Wayward Girls and offers her a proposition: a part in an upcoming movie filming in Berlin in exchange for her freedom. While it seemed too good to be true, Pagan reluctantly agrees and is sent to Berlin. Pagan personifies the sassy movie star of the fifties, which makes her a fun protagonist--but she still has plenty of depth and flaws that make her interesting as well. Set in the simmering tensions of the Cold War, this thriller/mystery is fast moving and will satisfy the historical fiction buff as well as those who like a good mystery!