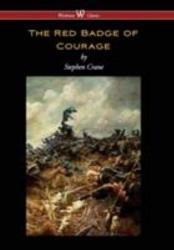 The Red Badge of Courage is really not a great book. It is centered around the Civil War and tells the story of Henry, a Union soldier who leaves his farm to go fight. During the war he cannot make up his mind to run away from the field or stick with his friends in battle. While some might find the book interesting, personally it just dragged on and on. Sometimes it would go really in depth into a battle or a part of the story that was not very important and in others it would just gloss over a major part that you needed to understand. I would not recommend this book to anyone as it is hard to understand and is not very well written.