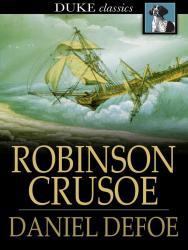 Robinson Crusoe is an incredibly fun novel to read. It is a fictional autobiography about the character Robinson Crusoe and his adventures while shipwrecked on an island. While the book does use some confusing language at times, the creative results it produces are greatly entertaining. The book starts slow, however, the pacing of the book almost depicts the exact development of Crusoe through his stagnant start and then a life of adventure later on. Around a third into the book, Robinson Crusoe simply states that he would focus on only the important parts of his adventure due to his lack of ink. It is at this point where the book starts to shine, and Robinson's island survival starts to mix supernaturalism and realism. The novel does not have any super deep themes and rather opts to just tell a straightforward story, unlike many modern island survival novels that attempt to be thought-provoking. Overall, the novel was a fantastic read. I would recommend this book to any person that enjoys adventure and survival.