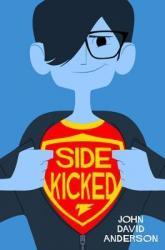 Andrew Bean is a normal kid on the outside but on the inside he is the Sensationalist, a sidekick with super senses. Andrew joins a superhero organization called H.E.R.O this affiliation trains people with superpowers so they can be sidekicks for superheros and someday supers themselves. His hero, The Titan used to be the best (and coolest) superhero but after an unfortunate accident while fighting a notorious criminal called The Dealer he disappeared. This left the sensationalist with no hero to help him when he needs it most especially when the Dealer returns seeking revenge on The Titan. In the middle of this all he still has to be careful not to blow his cover, even to his parents.