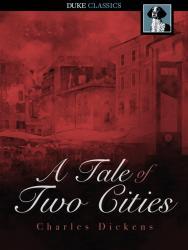 A Tale of Two Cities by Charles Dickens is one of the most popular books of all time, with over 200 million copies sold to date. The novel is set in London and Paris before and during the French Revolution and depicts the plight of the French peasantry demoralized by the French aristocracy, and many unflattering social parallels with life in London during the same period. The main characters are Charles Darnay, a French aristocrat who falls victim to the indiscriminate wrath of the revolution despite his virtuous nature, and Sydney Carton, a British barrister who endeavors to redeem his ill-spent life out of his unrequited love for Darnay's wife, Lucie Manette.

A Tale of Two Cities

One of Charles Dickens's most famous novels, A Tale of Two Cities is also one of his shorter (and better) ones. It begins with an unflattering portrait of an England overrun by highwaymen and courts which are almost as rapacious, and soon shows us a France where things are even worse. Nowhere does Dickens demonstrate his marvelous ability to capture moods and sentiments better than in his depiction of a seething, oppressed populace on the verge of boiling into violence.

And now that the cloud settled on Saint Antoine, which a momentary gleam had driven from his sacred countenance, the darkness of it was heavy—cold, dirt, sickness, ignorance, and want, were the lords in waiting on the saintly presence—nobles of great power all of them; but, most especially the last. Samples of a people that had undergone a terrible grinding and regrinding in the mill, and certainly not in the fabulous mill which ground old people young, shivered at every corner, passed in and out at every doorway, looked from every window, fluttered in every vestige of a garment that the wind shook. The mill which had worked them down, was the mill that grinds young people old; the children had ancient faces and grave voices; and upon them, and upon the grown faces, and ploughed into every furrow of age and coming up afresh, was the sigh, Hunger. It was prevalent everywhere. Hunger was pushed out of the tall houses, in the wretched clothing that hung upon poles and lines; Hunger was patched into them with straw and rag and wood and paper; Hunger was repeated in every fragment of the small modicum of firewood that the man sawed off; Hunger stared down from the smokeless chimneys, and started up from the filthy street that had no offal, among its refuse, of anything to eat. Hunger was the inscription on the baker's shelves, written in every small loaf of his scanty stock of bad bread; at the sausage-shop, in every dead-dog preparation that was offered for sale. Hunger rattled its dry bones among the roasting chestnuts in the turned cylinder; Hunger was shred into atomics in every farthing porringer of husky chips of potato, fried with some reluctant drops of oil.

After spending eighteen years in the Bastille, a French country physician is released and allowed to emigrate to England, where he is reunited with the daughter he has never met. Lucie Manette, typical of Dickens women, is a pure-hearted angel who is instantly devoted to him despite never having known him. Through various plot twists, Lucie marries Charles Darnay, who turns out to be the expatriate nephew of the Marquis who had Doctor Manette imprisoned, in a backstory eventually revealed to us with an even more improbable plot twist.

Once the Revolution begins, Charles Darnay is lured back to Paris to save the life of one of his former servants. Naturally, he is promptly imprisoned and put on trial. His family, including Lucie and their daughter, as well as pretty much the entire cast of the novel thus far, follows him, and are all put in peril of meeting Lady Guillotine. It was the popular theme for jests; it was the best cure for headache, it infallibly prevented the hair from turning grey, it imparted a peculiar delicacy to the complexion, it was the National Razor which shaved close: who kissed La Guillotine, looked through the little window and sneezed into the sack. It was the sign of the regeneration of the human race. It superseded the Cross. Models of it were worn on breasts from which the Cross was discarded, and it was bowed down to and believed in where the Cross was denied.

Dickens's stories are full of improbable plot twists. Characters who met once will always meet again. The coincidences in A Tale of Two Cities almost defy the reader's suspension of disbelief -- but it's Dickens, and Dickens can be forgiven a lot. He shows the pitiless brutality of the French aristocracy and the suffering of the people until your sympathies are entirely with them, and when the tumbrils begin rolling through the streets you can't but think that the aristos had it coming and then some. But then the Terror is unleashed -- and personified in the form of Madame Defarge -- and the oppressed turn just as brutal and pitiless. This is the only way Dickens could have brought our sympathies back to the main characters, who after all, have lived pretty safe and privileged existences even if they weren't the evil "Monseigneur" who ran children beneath the wheels of his carriage. And let's face it, Charles Darnay really picks up the Idiot Ball when he goes back to Paris.

I doubt there are many people who don't know how the novel ends, but while it's a story of redemption and self-sacrifice, I was not nearly as touched by Sydney Carton's heroism as I was by the Madame Defarge vs. Miss Pross
smackdown, which I think is one of Dickens's best climaxes ever, and which none of the film adaptations (below) did justice:

"You might, from your appearance, be the wife of Lucifer," said Miss Pross, in her breathing. "Nevertheless, you shall not get the better of me. I am an Englishwoman."

Madame Defarge looked at her scornfully, but still with something of Miss Pross's own perception that they two were at bay. She saw a tight, hard, wiry woman before her, as Mr. Lorry had seen in the same figure a woman with a strong hand, in the years gone by. She knew full well that Miss Pross was the family's devoted friend; Miss Pross knew full well that Madame Defarge was the family's malevolent enemy.

"On my way yonder," said Madame Defarge, with a slight movement of her hand towards the fatal spot, "where they reserve my chair and my knitting for me, I am come to make my compliments to her in passing. I wish to see her."

"I know that your intentions are evil," said Miss Pross, "and you may depend upon it, I'll hold my own against them."

Each spoke in her own language; neither understood the other's words; both were very watchful, and intent to deduce from look and manner, what the unintelligible words meant.