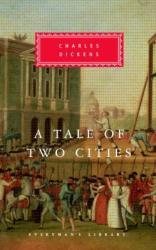 A Tale of Two Cities is a captivating book. Set during the period leading up to and during the French Revolution, the book details how the French aristocracy and the French Revolution affected the rich and the poor through the stories of Charles Darnay and Alexandre Monette. It also shows the angry and vengeful side of the Revolution through the Defarge's and their wine shop. A scene where a wine cask is dropped demonstrates the desperation and poverty experienced by the citizens of Paris that led to the anger behind the revolution. Dickens also brings the book to life through life-like characters that emotionally invest readers in the story. Alexandre Monette exhibits fatherly care for his daughter, yet he also struggles to deal with his time in prison, leading him to rely on his daughter for support. Sydney Carton contains likeable aspects mixed with relatable flaws that make him instantly lovable. Dickens expertly connects each scene to develop the story and foreshadows multiple aspects of the climactic ending throughout the book.