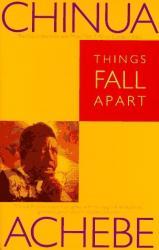 Things Fall Apart is about a Nigerian man, Okonkwo, who watches as his village is destroyed by European missionaries. Once a feared and respected man in his village of Umuofia, Okonkwo is reduced to eventually taking the orders of white men. Okonkwo is a hard and emotionless man who believes that anything that is not masculine is weak and therefore unworthy. When missionaries come to Umuofia, Okonkwo urges his fellow villagers to resist the attempts to diminish their culture and replace their government, but he's met with little support. Eventually, Okonkwo is banned, and when he returns, his village has completely changed.

I liked Things Fall Apart because it's a great book that challenged the idea of African savagery and portrays African culture, specifically Nigerian culture, as complex and intricate, and not the 'uncivilized' society many people view Africans as today. Okonkwo is an interesting character because his unwillingness to adapt to the new change represents an internal struggle many pre-colonized Africans faced in the wake of colonization. The ending is symbolic because it represents the ultimate death of culture as a result of European exploration.

Overall, the novel provides a beautiful insight into another culture often ignored in mainstream media.