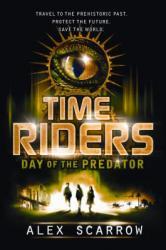 Day of the Predator, by Alex Scarrow takes place in 2001 in an archway in New York. The main characters are Time Riders, people who watch over time and make sure it doesn’t become corrupt. The story start when someone who would write a report in 2026 that would eventually begin time travel is assassinated in 2015. The Time Riders head to 2015 to try to stop the assassination before it can happen. The setting is in Texas where they land in a laboratory that is testing zero-point energy. The entire class the writer was in and the Time Riders are caught in an explosion caused by tachyons, particles that move faster than light. Instead of killing them, the explosion sends them 65 million years ago, 250,000 years before the asteroid that wiped out the dinosaurs happened. There a super intelligent undocumented species of reptiles (not dinosaurs) discovers them and silently begins to hunt them. They don’t make their appearance until later in the book. This species is intelligent enough to think and successfully manages to kill off the humans, except the Time Riders and the two humans that they could save who managed to warp back to 2001 in time. But when they get there, there is another problem. Actions packed and interesting, Alex Scarrow makes his book seem like a possible future for humans in another reality.