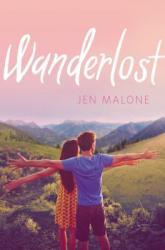 Wanderlost is about a girl named Aubree who is perfectly comfortable with living in laid back Ohio. It's predictable and she's fine with that. One night when her parents are gone, Aubree decides to throw a party where her perfect goody two shoes sister named Elizabeth unexpectedly shows up. She doesn't seem to mind and she promises to keep the party a secret. But then the cops show up at the house and when one of the cops knows Elizabeth, he is desperate to get her into trouble for "serving underage drinkers" even though she never did. The tour company Elizabeth was going to work for is her only way to get into the job that she's been dreaming about forever. But because Elizabeth gets arrested, she begs Bree to go do the tour and pretend to be Elizabeth. After lots of persuading, Bree reluctantly agrees. She never expected to spend her summer traveling across Europe to several different incredible sites with five elderly people. Bree then has phone conversations with a boy named Sam whom she can't help falling for. I bet every reader will fall for him too ;) I know I did. Eventually, Bree knows she needs to tell Sam the truth about who she is. Can she do it? This book is one of the best books I've ever read. The author is great at describing feelings and the characters were round. I hope you guys will fall in love with the characters and plot as much as I have.