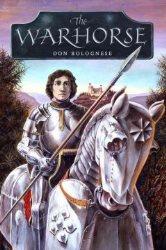 In my opinion, Warhorse wasn’t a very good or enjoyable book. The only reason I chose this book is because we were learning about the renaissance era, and I thought, “Maybe this will give me an edge on it.” I was very, very, VERY wrong. This book is about a boy named Lorenzo in the Renaissance era who is an amazing crafter and designs armor protection for a Duke. One day there is a war about to take place so Lorenzo decides to fight the war with the Duke. But, his mentor, Massimo, forbids Lorenzo to because of his father’s wishes. The young armor-smith obeys his master, but to help the army, he lends his horse, Scoppio, to the Duke. Then Lorenzo later goes and joins the Duke, and gets his horse captured! Sorry, can’t tell you anymore. In my opinion, this book was very confusing. To start off, at chapter about 15 it started to get really funky. So up until then you can read it strait-through, but then you need to start to re-read. Also this book was a very uplifting book about hope, but to me it was all about obstacles of war and perseverance. This book was very odd, I mean, how many books can you find about historical fiction on Renaissance war? That is one of the reasons I chose to read some of the odder books, to give you an inside look on the weirdest things. This is the worst book out of 14 that I have read, but a close second would have to be Wh3n. Sure it was action packed, but it was also very depressing. So don’t read that one either. But in all, the character is very un-relatable, that is why I found this book so bad, sure he had a lot of character development, but how many kids do you know that are armor smith designers? So on that note I’ll leave you off, Maybe you’ll like a hidden element I didn’t catch! So with that in mind, go read this book to find out for yourself!