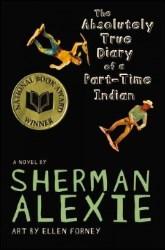 The Absolutely True Diary of a Part-Time Indian is a very good and interesting book. This book is about an Indian boy named Arnold, also known by his nickname Junior, who is a freshman in high school. Junior lives on a Native American reservation and doesn’t fit in with any of the other kids very well because he has many special abilities that make him look, talk, and function differently. In the story, he has a best friend called Rowdy who is in his eyes, is really tough and strong. One day, Junior decides that he needs to go to a better school OFF the reservation (Rez) called Reardan. When he transferred, Rowdy decided that he hated Junior. Everyone at his new school calls Junior names, and makes fun of him because he’s an Indian with disabilities. Throughout the book, Junior encounters many more hardships and obstacles. I did like the book, although it was very depressing towards the end. The book has parts with more mature content, but is not bad if you are older. The part I enjoyed in the book is when Junior makes the basketball team by being crazy and making crazy shots. This is the second best book I have read in 2016… Messenger of Fear being the first. All in all, this is a great book that any teen should check out if they are mature enough to read it.