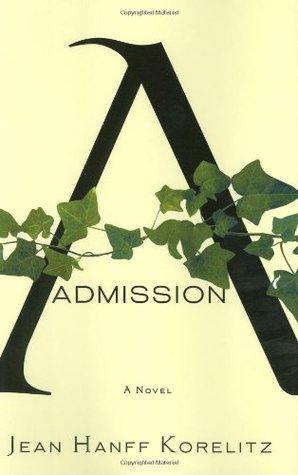 Admission is a book about the life of a Princeton admission officer Portia Nathan, who struggles to juggle the life changing impact of college decisions with old regrets, new beginnings, and constant change.
That's all I can really write for the summary of this book, since anything more would perhaps spoil the entire book. The story starts with an admissions officer: a simple yet captivating protagonist, not only through the controversy of her position but through the personality in her words. From the beginning we know she's hiding something from us, but it isn't so vague as to be annoying or so pressing as to be overwhelming. It shows how she views her secrets as simply things from her past that are occasionally a blip on her radar, then disappear beneath the waves yet again. Soon, the story begins to spiral into different directions, showing us more of her life as it begins to fall apart. One thing this book does excellently is show the struggle of college admissions alongside the details of Portia's life, often intertwining and combating the two ideas. They contrast brilliantly: young, fervent minds struggling to make their impact against the stark background of a middle-aged woman's fight for purpose. Another thing I find fascinating and amusing is how this book goes in so many different directions and yet holds the exact same tone, making for a roller coaster of a novel that still feels consistent and grounding. For example, the nameless secret we're told about from the beginning is finally revealed (of course) and despite the groundbreaking discovery and impact that ought to change the book from a distant examination of a woman's life to a fraught soap opera, the book still makes it known that the story, as a whole, hasn't changed. Despite seemingly dramatic or strange occurrences, everything is still realistic, showing how ridiculous things often happen to seemingly ordinary people.
This book was entrancing to me. Despite my usual near-hatred of realistic adult novels, this book stood out for a variety of reasons. First, it had real heart. The characters felt real, their mistakes felt earned, their gains were uplifting, and their motives were stark. I never met a single character in this novel that I didn't feel could walk out of the pages and shake my hand. Secondly, the prose is beautiful, and displays sordid emotion. One thing I often critique in adult realistic fiction is the lack of prose as an attempt to drive home the meaninglessness of adult life. This novel was willing to show its protagonist genuinely struggle with heartache and depression and nostalgia through gripping, raw language. It was also willing to be funny at parts, to show how, even when life is at its worst, there is often so much to laugh about. Finally, the ending was simple, yet so fitting and beautiful. It really encompassed everything the character had gone through, and made me feel hopeful for their future and respectful of their past. All in all, I believe this book is excellent for any seeking books about college admissions, raw and real characters, stunning prose, witty humor, and stunning writing.
Reviewer Grade: 11