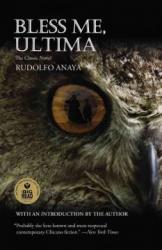 Taking place just after World War II in New Mexico, this novel follows the coming of age of Antonio (Tony). The story is told through the perspective of adult Tony who reflects on his childhood, starting at the age of seven when an elderly curandera, Ultima, moves in with him and his family. Throughout the novel, Tony struggles with understanding his destiny, and whether he should embrace the vaqueros of his father's family or the religious farmers of his mother's. Torn between his parents' different dreams for his future, Tony forms a close bond with Ultima, who serves as his middle ground. During the course of his childhood, Ultima shows Tony how to embrace all sides of his identity to create something new.

I enjoyed this book because it covered a variety of important themes, and although it's centered around Chicano culture and literature, its message transcends cultures. Tony's story was full of heartbreak, adventure, love, and hope, and in one way or another, I found that I could relate to his story and the characters around him. The 2013 film adaption also does a good job of following the original storyline.