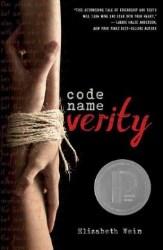 This book has an intriguing premise. A British young woman, apparently a spy (code name "Verity") being held captive in occupied France, tells the story of her espionage career and subsequent capture. In an attempt to avoid further torture and prolong death at the hands of her captors, she promises to reveal secret codes that are related to British intelligence. The first half of the book is written in first person as a journal of sorts addressing her captors. The style itself works fairly well, but the narrative voice is annoying -- I found the main character to be insufferably conceited, rather than brazen and confident (as she was probably intended to be). She was not likable, and thus I didn't care much about her fate. Until...

A new narrator takes over -- Verity's friend and pilot Maddie. She was the one flying the plane that brought Verity to France. She is less uppity, less conceited, and altogether more relatable and likable. She tells the other side of the girls' story -- her training as a pilot, her friendship with Verity, and what happens to her when Verity is captured. I found myself rooting for her all the way. She also managed to make Verity more likable, and as more is revealed, I discovered that I enjoyed them both. By the end of the book, I saw both of them as exceptionally brave characters to be respected and admired.

Although this book is fiction, there are many references to real-life WWII intelligence operations, and plenty of mechanical details concerning planes that are also interesting. The book improves significantly as it progresses -- if you don't like the first half, wait for the second. Anyone who is interested in history or espionage will probably like this. Additionally, it develops into a beautiful story of the power of friendship and sacrifice, but is never sappy. I probably wouldn't read it again, at least not for a while, but it is definitely worth trying.