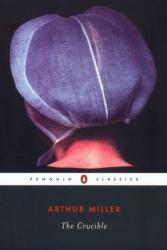 The Crucible is an allusion to the Salem Witch Trails of 1692. The main character, John Proctor, is a well-respected farmer in the small town of Salem, Massachusetts. When the first rumors that there are witches in Salem start stirring, Proctor pays little attention to them: he doesn't particularly believe in witchcraft and believes the townspeople are simply being hysterical. However, when his wife is accused of witchcraft, John has to put aside his personal feelings and find a way to save his wife and friends from hanging.

I hated the ending, but it made the play so much better. John develops significantly as a character. In the beginning, he only cared about protecting his reputation and hiding his affair, but in the final act, John became a martyr for the people of Salem. He's my favorite character in the play, and the movie is just as good!