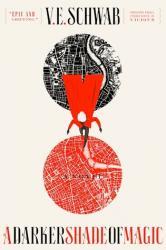 A Darker Shade of Magic introduces the concept of four separate Londons from different worlds. Grey London: grim and without magic, Red London: vibrant, fantastical and full of magic, White London: losing its magic from an ongoing war and numerous power shifts, and Black London: a mystery that was closed off after a mysterious accident. The main character, Kell, is one of two people who are able to travel between the Londons through the use of a type of blood magic. He is the official messenger for Red London and brings messages to the kings of the different cites; however, unofficially he is a smuggler who sells objects from other worlds. He runs into a thief in Grey London after coming into possession of an artifact from Black London, and they must navigate its power and defeat the people that want to abuse it. Schwab's world building and magic systems are incredibly compelling and the concept as a whole sets up a fantastic series. However, the book overall was quite a let down as the story itself was quite overdone, which would not have been much of a problem if the characters were written well. In some parts of the book it become difficult to like the two main characters, which was disappointing because they had all the elements to be great. All of these faults were not the downfall of the book, and Schwab could have potentially gotten away with them; the main flaw was the pacing. At times the pacing was slow and uneventful, making it difficult to want to read the book. A Darker Shade of Magic had the potential to become an amazing fantasy novel because of its ingenuity, but its execution was lackluster.