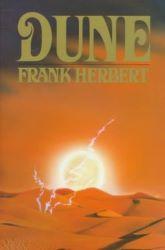 Dune is the first book in a series by Frank Herbert (something I didn't know until after I had started reading). This was a wonderfully imaginative book with interesting characters, conflict, and world building.
You follow Paul as he travels to the planet of Arrakis. You similarly follow those close to him, notably his mother, Jessica, as they all grow accustomed to the unfamiliar landscape and the politics that encompass it.
While the language of the characters originally threw me off, I grew accustomed to it and it helped immerse me in the story and characters. Seeing the dynamics and customs of not only the Atreides family, but also natives of Arrakis, was interesting and better as they intertwined with each other.
Also seeing the various themes of the story was also appealing (thanks English class!) as they intersect with each other in ways I've never seen before.
This is a great book and I recommend it, even if Sci-fi isn't your normal genre.
Reviewer's Grade: 11