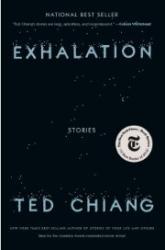 My librarian uncle introduced me to Ted Chiang recently, and I was so intrigued by such an award-winning author who wrote exclusively in short stories that I had to check out one of his books. Exhalation is a collection of these stories, and I can see why Chiang is lauded as a writer. It seems that modern science fiction is too focused on new technologies and how they can lead to utopias or dystopias. In Chiang’s stories, I saw some stark realism that took well-tread topics of the genre and examined them through a lens that was extremely realistic to how society would function with such advancements.

It was refreshing—a sigh of fresh air, or exhalation, if you will—to read stories about parallel universes, artificial intelligence, and time travel that didn’t stick to the same tropes that have made science fiction almost boring in comparison. In the end, Chiang is so concise with his language as to create these universes anchored in our reality and uncover all the intricate ways in which new technologies would change it without delving into the fluff of a full-blown novel. And perhaps that’s what makes these short stories work: focusing on how people interact with new technology, instead of just society at large.

These stories' personal nature hits home, mostly because they were pulled from current technologies and extrapolated into the fringe sciences that are on the cutting edge. For instance, we already record much of our days, so how does our memory change if we have a perfect record of the past? Additionally, how many technologies are made widely available as entertainment first, and how many interest groups pop up as fans of these technologies until they are eventually made obsolete? These and many other thoughtful topics are only some of the reasons I would recommend any fan of true sci-fi read this book.

A collection of some of the best sci-fi stories I’ve ever read, I give Exhalation 5.0 stars out of 5.