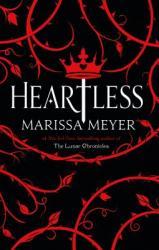 In Marissa Meyer's (The Lunar Chronicles) new standalone novel, she explores the Queen of Heart's origin story. Lady Catherine Pinkerton wants nothing more than to open her own bakery with her maid, Mary Ann. But as the Kingdom of Hearts operates in a style similar to that of Victorian England, Catherine finds herself without the money or permission to do so. Worse yet, she's being courted by the king, a silly man that she has little interest in marrying, though she is under constant pressure from her mother to accept his advances. And then, at a royal ball, a hot new court jester with murky motivations appears alongside a Jabberwock and Catherine's life and the Kingdom of Hearts will never be the same.

This was a pretty hotly anticipated read for me, as I adored the Lunar Chronicles. And a lot of the best things about the Lunar Chronicles were present here too: Wonderland and its delightful, sinister, and delightfully sinister characters are definitely a part of the story without overwhelming the character development or seeming trite. It was brilliantly executed. The romance, for me, was just a bit overbearing, and I had a hard time investing in Jest, the love interest. He was introduced as a magician, and then all I could envision whenever he was around was GOB Bluth dancing around to Final Countdown. Decidedly not sexy. We also didn't really learn enough about him for me to ever really care about his fate. I really enjoyed the other parts, though - Catherine's struggles to do right by her parents while preserving her dreams of opening a bakery were realistic and relatable, and her transition from hero to villain was pretty believable in the context of everything that happened. Warning: the food is well described - this book will make you eat any and all baked goods in your house. Oh, and the last 100 pages, the end game, was fantastic. It's a lot of fast paced action laced with emotion, and it's marvelous.

While there was a bit too much romance in this one for my taste, I think those that enjoy a bit more romance in their fantasy reads, or those that love a well-written, somehow inventive fairy tale retelling will love this one. I liked it - 3 stars.