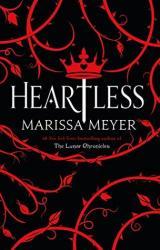 Based off Lewis Carroll's character the Queen of Hearts, Catherine is a young woman living in Hearts with her parents in their bakery. Catherine knows that the King intends on proposing to her, but she doesn't want to marry him, convinced that he's infatuated with her beauty, but not in love with her. At the King's ball, Catherine meets Jest, the joker, and she falls in love with him. In an attempt to be with Jest, Catherine tries to run away with him to Chess, but doesn't make it.

I like how this book is one perspective of why the Queen of Hearts is 'heartless'. The characters are very similar to Carroll's characters, but the plot is a little different, which makes it more exciting! I also enjoyed how the book touched on the idea of fate, and whether people can outrun their fate, like Catherine tried (and failed) to do. My favorite character was Jest. Being a Joker, he was naturally an amusing character, and his ending hurt me just as much as it hurt Catherine! Hatta was my least favorite character because of all his tricks, and I was surprised when he confessed to Catherine at the end and went mad. This book had the perfect balance or romance, drama, adventure, and heartache.