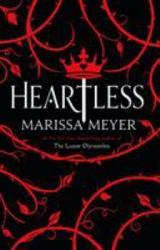 This book is about the Queen of Hearts and how she became so evil. Catherine's dream in life is to be the best baker of all of Hearts. These skills end up wooing the king and he eventually asks for her hand in marriage. Her mother wants her to agree, but Cath soon finds her heart is drawn to someone else, the mysterious Joker. With Hearts under attack by the dangerous Jabberwocky, Catherine gets pulled into an adventure that soon unfolds the reasons behind her infamous tale in the book: Alice in Wonderland.

I really liked this book mostly because of the characters. They were really well developed and I felt as if I knew them and was a part of their story. The plotline gets really slow in the middle, but by the end, I really enjoyed it. Meyer is the same author who wrote the Cinder Series. Even though this book is not like the Cinder Series, they are still really similar, so if you enjoyed that series, you will like this book.