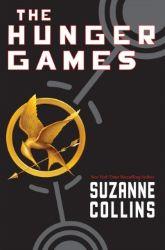 The Hunger Games is a thrilling novel that kept me on the edge of my seat the whole time I read it. It is a dystopian fiction novel with lots of action aspects as well. I chose this book because I heard many great things about it, and I absolutely loved it!
In the setting of The Hunger Games, there are 12 Districts that the people live in. Many years before the story takes place, there were 13 Districts. However, there was a rebellion against the government, and the Districts lost and the 13th District perished. The government holds annual Hunger Games to remind the citizens what happened during the rebellion. The Hunger Games takes two kids from each District and force them to compete in a fight to the death match in an arena. Katniss Everdeen volunteers as a tribute when her little sister’s name is drawn during the Choosing Ceremony. During the Hunger Games, she makes friends and enemies, and learns some of the schemes behind the government.

This novel was so entertaining and I was hoping that it would never end. I think people who like action and dystopian novels would like this book, and if they don’t mind some violence.