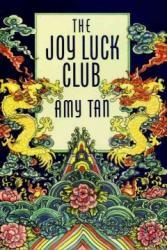 The Joy Luck highlights mother-daughter relationships in the midst of generational conflicts. The Joy Luck daughters, Jing-mei, Waverly, Rose, and Lena, are first generation Chinese-Americans living in San Francisco during the 1980's. They feel their mothers are overbearing and do not understand their desire for independence. Ironically, their mothers feel they are losing their Chinese identity and became Americanized.

I love this book! The book is structured like the traditional Chinese game mahjong, and each of the daughters and mother's stories are complex and thought-provoking. Although it's set back in the 80's, a lot of its themes regarding mother-daughter relationships and intergenerational conflicts are relevant amongst first-generation immigrants and families today. Among the eight main characters, Jing-mei is my favorite, because she's really the only daughter that fully embraces her hyphenated identity.

This book is different because it tells the story of eight women who are so similar yet so different at the same time. I really recommend this to anyone looking for a female dominated novel!