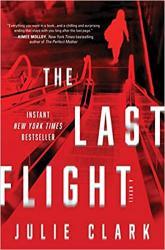 The Last Flight is a thriller filled with many unexpected plot twists and cliff hangers. Claire is married to an affluent man named Rory. Everyone is jealous of Claire as they believe she has everything in life. Little does the world know about Rory's temper and abusive behavior. An unexpected meeting at the airport changes everything for Claire. At the airport, on the way to Puerto Rico, Claire meets another woman Eve who also seems to be in a dire situation. Just before Claire's flight is set to depart the two woman swap tickets and Claire is now headed to Oakland and Eva is on her way to Puerto Rico. As Claire arrives in Oakland she finds out that the flight to Puerto Rico crashed in the middle of the Atlantic Ocean with no survivors. Claire is now stranded in Oakland with no money, and must live the life of a complete stranger who has some dark secrets. This book is a great read and it will keep you at the edge of your seat.