Book Review: Me Myself and Him 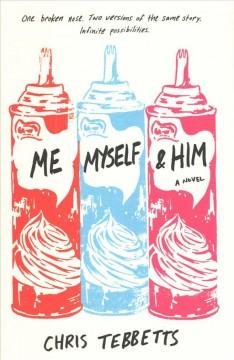 Title of Book
Me Myself and Him
Author
Tebbetts, Christopher
Rating
3 stars = Pretty Good
Review

Me Myself & Him follows Chris Schweitzer, a graduated high school senior ready for his last summer in small town Ohio. But when he does whippets in an alley, passes out, and ends up in the hospital, his life splits down two paths. The story follows both these possibilities: one where his parents find out and ship him off to spend the summer with his distant father, and a second one where his parents remain in the dark, and he stays in town with his slightly distant friends. No matter which path taken in this multiversal tale, both sides end with Chris' life changed forever.
This book was very solid. I say this meaning no offense: it wasn't boring, slow, tangential, or otherwise hard to read. It was easy to read, and if I recall correctly, I finished it in under two days. I call this a solid story because that's what it is: a story that is very easy to enjoy. The characters are fun and witting and exciting; it's very easy to get invested in them and their choices. Even antagonistic characters (often including the main character) are likable and relatable, despite their horrible choices. The dual story structure stays interesting and fresh, exploring the characters from many different angles. I like how the story expands on its dual universe origin, including science and research to solidify the basis of the premise.
There were a couple things that threw me off. One storyline became, to me, far more intriguing because it delved further into the protagonists relationship with his father, which really helped flesh out both characters. The other side of the story had its merits in evolving the protagonist and his relationship with his friends, but it wasn't nearly as compelling for me. The only other issue was that the ending was slightly anticlimactic. I don't disagree with how the ending turned out, since it resolved both sides of the story, but the ending just felt a bit abrupt.
Still, these are my opinions, and one of the reasons I called this a solid story is because I think anyone could enjoy it. This book is fun, clear-cut despite a complex premise, relatable, and heartwarming. I would recommend this to anyone looking for a story about goodbyes and new beginnings, with some bittersweet laughter along the way!
Reviewer Grade: 11