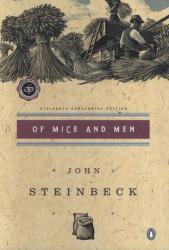 George and Lennie are two laborers searching for work in California. While George is small and quick, Lennie is a man of tremendous size and has the mind of a young child. Despite their differences, they have formed a "family", clinging to their dream of owning an acre of land and producing their own produce. When they find a job at a ranch in the Salinas Valley, fulfilling their dream seems to be within their grasp, but conflict arises when Lennie begins a flirtatious relationship with the ranch owner's wife, and even George can't protect him from that.

I liked this book! Lennie and George's relationship is heartwarming, and it shows that having close friends can make even the hardest life bearable. My favorite characters were Crooks and Lennie. Crooks, who lives by himself because he is the only black man on the ranch, shows how discrimination affects mental well-being. Like Lennie, Crooks has been outcasted and looked down upon by society for something he can't control, and I liked how Steinbeck brought two very different characters together by sharing their shared loneliness. George is a complicated character because, at the end of the book, he does what he believes is 'best for Lennie' but it begs the question of how far a friend should go if it's in 'your best interest'. I watched the movie as well, as it was also really good!