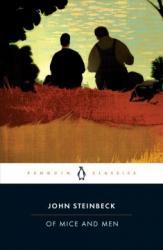 Steinbeck's Of Mice and Men is quite the definition of a classic book. The two main characters, George and Lennie wander around Soledad California in the 1930s, pursuing their dream of owning their own farm. Throughout the book, there is a lot of conflicts involving Lennie, who battles with intellectual disabilities. Of Mice and Men does a fantastic job of highlighting the ups and downs of a relationship, especially when George is left to a lot of "caretaking" roles. The book was not excessively predictable, however, this is a definite element of foreshadowing that could add predictability. The entire story involves the idea of pursuing your dreams, as well as the difficulties people ran into during the great depression, and some of the sexism, racism, and overall discrimination. I think that this is a very important topic to bring awareness to, especially during the time, and I believe that Of Mice and Men does a great job illustrating that.