Book Review: One of Us is Lying 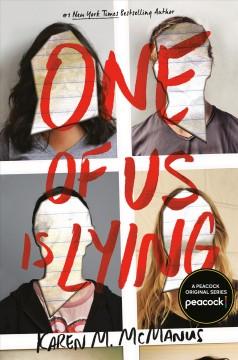 Everyone contains secrets but it is about how far you are willing to bear them and how long you want to shelter them. One of Us Is Lying is the first book in the One of Us Is Lying Trilogy and a YALSA 2018 Teens' Top Ten selection. One of Us Is Lying has the perfect mix of drama, suspense, mystery, and romance, and I haven’t read anything as unique. The book is extremely well written, perfect and extraordinary with the proper balance of words to keep anyone seated in one spot for hours at a time. The novel starts with five students sent to detention with only four leaving alive. The Brain, Bronwyn, The Beauty, Addy, The Athlete, Cooper, and The Criminal, Nate, Bayview High School’s most notable hypocrites are brought down throughout the novel to a level so low. According to investigators the death of a student during detention with the other four students, The Outcast, Simon, was not an accident. The leading characters are Cooper, Addy, Bronwyn, and Nate. They are all altogether diverse in the way they behave and their personality. I found Cooper the most interesting, but Bronwyn was the most sympathetic. Addy changed throughout the story starting as a typical high school popular girl and then ending with a more refreshing style. I enjoyed how the story was put together in the first person because the perspective was constantly varying which made it altogether more interesting. It uses multiple perspectives to provide you the point of view of not one, but all four suspects in a murder mystery with their motives, but the real marvel lies within the journey and experiences of the characters. This book is much deeper than just a murder mystery, and it has much more to it in terms of character development and diversity. You witness the characters’ vulnerable lives being picked apart and their deepest secrets being spread to their peers. This book is 5 Stars and exceeded expectations. I enjoyed this book and suggest it for the next time you want to read something as unique as this.
Reviewer 8th Grade