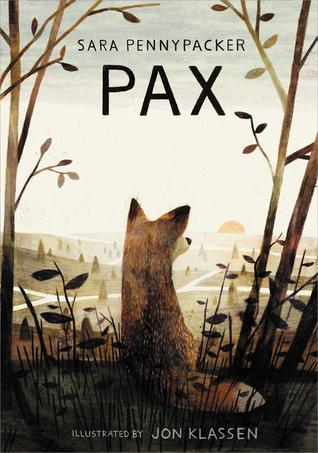 “Pax” is a story about a boy and his fox. Peter has been taking care of Pax since he was a small kit. Over time Peter and Pax became very close. Peter’s father makes him leave Pax in the forest because Peter has to go live with his grandfather. Pax can’t go with Peter to his grandfather’s. After arriving at his grandfather’s house Peter realizes the mistake that he made, he decides to go after Pax. Pax who is hundreds of miles away is still holding out hope that his boy will come back, learns a couple of things about life, and makes a few friends. Peter makes a friend on the way and learns many things on his journey. Both of them want each other but will they find each other again, over hundreds of miles?

“Pax is an amazing, emotional book. It tells an amazing and eloquent story. By showing both Paxs’ and Peter's points of view you become very attached to them and you desperately want Peter to succeed. It portrays a relationship between a human and an animal beautifully. The ending made me feel many emotions. In my opinion, the ending was beautiful but if you really look at it it could be called rush with the way it was written. The ending was amazing and undesirable but at some point in the book, I knew that it would end that way. The book shows change so well, from Peter and Volas's relationship to Bristle and Pax's relationship, and just the characters in general. The writing describes everything and it was a beautiful writing style. We don’t know where the book takes place so things that are brought up in the book throw you for a curve. We don’t see what happens with Peter’s grandfather due to the ending. This book was beautifully written and it touches your heart, while some events in this book are unlikely, so much of this book will remind you of real-life. This is a book about change and it is so applicable to life. “Pax” is definitely a book to read when you want a book that will touch your heart and make you feel many emotions.