Book Review: The Pros of Cons 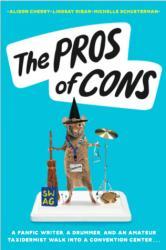 Vanessa and Soleil had never met but at the convention. They were online friends and they wrote fan fiction together, but they never met. It all started out great. The one issue is that Vanessa thought that Soleil was her girlfriend. On the first day Soleil read her own story in front of people instead of the one they worked on together. This made Vanessa angry but she kept it to herself. Then a few nights later Vanessa kissed her and that's when they fought. She had already met Callie. Soleil kicked her out of the
hotel room, and she went to stay with Callie. The the three friends decide to make a podcast for Vanessa's Creative Corner entry.

Pheobe runs into Callie while her and her friends where bringing percussion equipment places. They run into each other than Pheobe and Callie accidentally switch bags. In the group ensemble performance she realizes that she does'n't have her mallets. Then her friend Scott takes the mallets she was using for a solo. She ends up have to us scalpels from the solo and cuts up her hands. After the performance she has to put band aids on her hands. She gets in a fight with her best friend, Scott, and her roommate. The ends up in Callie's room.

Callie is with her dad and his turkeys. She is her dads assistant. On the first of the convention Callie meets her dads old assistant Jeremy. Jeremy is one of the judges, and Callie makes fun of her dad in front of him. After Jeremy leaves her dad yells at her for making fun of him in front of a judge. Callie is mad at her dad after this because he yelled at her and doesn't know she is even alive sometimes. Callie decides to sabotage her dads turkey seminar. During the seminar he deals with everything as if it was on purpose. Then Callie and her dad get in to a huge fight, because her mom left and court only gave Callie 4 weeks to live with her mom, but her mom offered full time. Her dad without even talking to Callie told her mom she didn't want to go. Callie was upset, but in the end they made up and are all good now.

I chose this book because of the clever title and how it was written in different point of views. I think the plot is excellent.