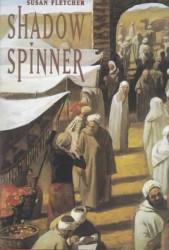 “Shadow Spinner” is a book based on an old legend that some intellectuals say began in India, although evidence seems to point to a Persian book of fairy tales. The original story tells of a Sultan who, after finding his wife with another man, chooses to believe that all women are deceitful. As cruel revenge to womankind, he marries a new girl every night and then kills her when morning dawns. One night his latest new wife, Shahrazad, begs to tell her younger sister, Dunyazad, one last story before the Sultan executes her the next day. The Sultan agrees and finds he enjoys the tale, but he is dismayed when it is not finished by morning. So he lets Shahrazad live to finish the story the next night. But it turns out that she also has time to weave another new tale but does not complete it either. And so she is allowed to live yet again.This continues. But how long will Shahrazad be able to keep telling her life-saving stories? Here the author of “Shadow Spinner” decides to give the legend her own
twist. Enter young Marjan, a servant.
Marjan is a young servant girl who will probably never find a husband. Who would want to marry a girl with a crippled foot?. Marjan was not born this way. Her mother purposely dropped a heavy pot on Marjan’s foot so the Sultan would never choose her for a wife. Although her mother did this for her daughter’s protection, Marjan feels furious towards her mother. She is especially angry because, after maiming her daughter for life, her mother drank poison like a coward. Throughout the book we catch glimpses of what this hot rage has done to Marjan and how she carries this grudge with her always.
One day Marjan and her mistress, Auntie Chava, enter into the Sultan’s harem to sell jewelry to the women who live there. Because she is so skilled at telling stories to the children of the harem women, she is approached by Dunyazad, who tells Marjan that Shahrazad is desperate for more stories. She has told the stories in every book that the Sultan owns and told all the tales she’s heard. She begs Marjan to tell a new story. Marjan agrees, and Dunyazad leads her to Shahrazad where she is asked to retell the tale. But before it is over Shahrazad frowns and says that she does remembers telling that same story already. She asks Marjan to tell another. Marjan consents to the queen’s request,but story after story she tells is rejected. At last she tells one that is new to Shahrazad. Grateful for Marjan’s help, Shahrazad asks her to come live in the harem so that she can continue to help provide her with stories that can save all the young women's lives. Knowing she will be forbidden to depart, Marjan is upset to be leaving her beloved Auntie Chava forever. But she is honored to know that Shahrazad needs her help.
One morning some time later, after Marjan has already been living in the harem for a while, Shahrazad tells Marjan that the Sultan loved her story and Marjan is overjoyed to hear that the tale was one that the Sultan was familiar with already and loved very much. But she is dismayed when Shahrazad asks for the rest of the narrative so that she can tell it to the Sultan, who wants to hear it the next night. It is a matter of life and death. Marjan tells Shahrazad that she doesn’t know the rest; she only heard the beginning from a blind storyteller out in the marketplace one day. But Shahrazad must have the story or the displeased Sultan may kill her. And so Marjan is smuggled out of the harem in the mornings in search of the blind storyteller so that she can learn the rest of the tale. Every evening she sneaks back to the harem empty-handed.
Shahrazad tides the Sultan over with other tales but knows that she must soon have the ending rest of the storyteller’s story to placate the ruler. Over the course of her search, Marjan discovers the Sultan’s mother has plotted to make her son angry with Shahrazad so that he will kill her. She wants to make her own servant queen. But her most shocking, discovery is the fact that Shahrazad loves her husband despite what he’s done to the young women of his city. When Marjan asks Shahrazad how she can possibly love a man like the Sultan, Shahrazad states this profound truth: “There’s nothing wrong with loving someone. It’s hating - that’s what’s wrong.” It is then that Marjan finally realizes her hatred toward her own mother is wrong. She must learn to forgive her for what she has done. In the midst of all this, the search for the storyteller goes on. But the Sultan’s mother is trying harder than ever to catch Shahrazad, Dunyazad, and Marjan in doing something wrong. Eventually, all three of them, along with a kind, elderly woman and helpful old man, are going to be killed. Marjan thinks she knows how to change the Sultan’s mind, but will she really be able to save everyone she has come to love so dearly?
I found this book to be a gripping tale, and enjoyed the deep message of love and healing shown throughout. Shahrazad’s mission to help the Sultan mend from where he has been hurt by his treacherous first wife is admirable and Marjan’s personal struggles are relatable. How does one find it in their heart to love someone who has hurt them (mentally or physically)? A fun, well-written story, but one that makes you think - “Shadow Spinner” is a beautiful re-imagining of a classic legend.