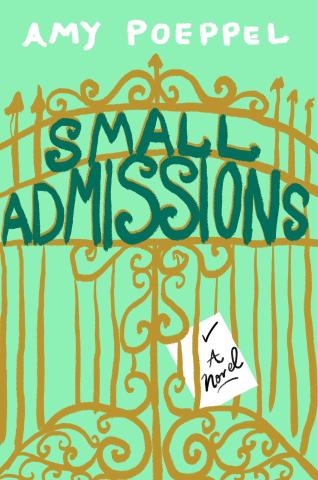 Small Admissions follows Kate Pearson, right after getting brutally dumped at an airport by her handsome, French, almost-fiancé. After the prodding of friends and family, Kate takes up a job with private school admissions, and is quickly thrown in to a mess of angry parents, bratty kids, scholarship grants, and interview skills. Throughout her journey, Kate and her friends will need to learn to let go, keep going, and grow up.
I love Amy Poeppel's books because each of her characters is so wonderfully flawed that it's a love letter to changing even as an adult. Every character in this book has a lot of issues, ranging between codependency, independency, over-confidence, under-confidence, and all possible maladies in between. This was very annoying in the beginning, but it lended to the catharsis of character development at the end. I never knew I could get so invested in a middle-aged woman making one good decision, but 300 pages of horrible decisions will do that for you! The characters themselves are amazingly vibrant and likable despite their horrible choices. There were a lot of names to remember at first, but each soon became memorable in their own way. They also interacted wonderfully throughout the book. Even though some characters got more time to shine than others, watching them bounce off each other was so fun. In particular, the female relationships in this novel get a lot of time and development, which I appreciate. The writing itself was great, not a ton of prose but very smooth and concise. The themes were phenomenal, and carried through the entire piece. There's a throughline of learning to let go of things you thought you'd always have, and while this at first seems obviously related to Kate's break-up, it applies to practically every character in the novel. People have to let go of jobs, schools, belief, and people, and it really is a love letter to letting yourself change for the better.
All in all, despite some issues with the large number of initially annoying characters, this book is phenomenal! I'd recommend this book to anyone who wants great character growth, a solid story, and a lesson on letting go!
Reviewer Grade: 12