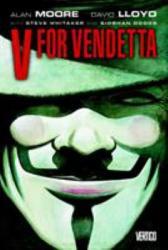 V for Vendetta follows V as he fights against an authoritarian government and trains a successor. The book questions the cost of losing art, literature, and beauty in an attempt to create complete control over society. The art adds another dimension to the story, and the colors used in V's house compared to the outside world emphasize the underlying message. V's character is captivating because he possesses such knowledge and culture yet brings destruction. This leads readers to consider the necessity of violence to preserve culture. V's mask holds similarities to Guy Fawkes', and certain actions between the two are also similar, adding historical parallels to the story. V's strong ideals and actions to back them up lead him to become the face of a revolution but at what cost?