Book Review: A World Out of Time 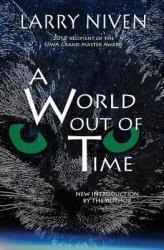 I’m starting to realize that science fiction in the 1970s might need to stay there. While there was a lot of progress in the genre past the golden era of the 1950s, many of these books are unfortunate snapshots of a time that has not aged well. Similar to Ringworld , I found A World Out of Time to rely heavily on the sexism that runs rampant through 1970s sci-fi. Additionally, while the hard science presented in this book was generally plausible, the way it was presented was so dry and dense as to make it more of a Ph.D. thesis than an entertaining read.

On the plus side, A World Out of Time explores many scientific ideas that were well ahead of its time. Aside from the normal sci-fi tropes of mind implants and artificial intelligence, this book also deals with climate change in a way that hasn’t been felt until now. Granted, it blames this extreme change of the Earth’s environment on the sun and less on the humans who inhabit it, but the thinking about what would happen to our planet if such a thing were to happen was thorough enough to be believable.

Despite these forward-thinking ideas, A World Out of Time treats sex and drugs as inconsequential parts of life in the future. It’s clear the culture of the 1970s influenced this part of the book, but it feels so outdated compared to today’s standards that it was difficult to read without rolling my eyes. Sure, it’s probably less prominent than the pulpy science fiction stories that came before it, but the fact that the author felt these things needed to be included tells me more than I need to know about him.

A dry hard sci-fi novel that hasn’t aged that well, I give A World Out of Time 2.0 stars out of 5.