Book Review: Race to the Sun 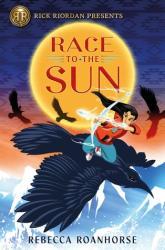 Nizhoni Begay is a normal seventh grader in many respects, minus the thing where she can see monsters. One day, she gets home from school to see a monster in her kitchen masquerading as her dad's potential boss. Sure enough, the boss-monster kidnaps her dad, and Nizhoni, her brother Max and their best friend Davery take off on a race to the House of the Sun to find weapons they can use to defeat the boss-monster and save Nizhoni's dad.

I really liked this one! All of Rick Riordan's books and the books on his imprint have something of a sameness to them, but that's not necessarily a bad thing (I'd compare it to the Marvel Cinematic Universe). You know you're going to get a snarky teenager narrating an epic quest to save the world where they'll be attacked non-stop by monsters from some sort of mythology. That's what you get here, but its the Navajo edition. I liked it a lot - I think it helps when the mythology being referenced originated more or less in your backyard, and as a Coloradan, it was a lot of fun to read. Plus, the mythology itself is just cool; Black Jet Girl, Spider Woman, and Crystal Rock Boy were particularly fun.

For readers who like mythology, action, adventure and snarky main characters. I really enjoyed this one, and will add this series to the list of books I listen to while I run! 4 stars - I really liked it.

Thanks to Disney-Hyperion and Netgalley for the eARC, which I received in exchanged for an unbiased review. Race to the Sun will be released on 14 January, but you can put your copy on hold today! 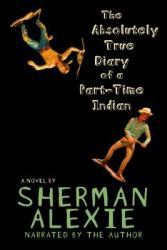 The Absolutely True Diary of a Part-Time Indian is a book that was assigned for my literature class, meaning I had low expectations and thought I would hate the book. However, the opposite was true, and the author actually uses a humorous outlook to portray a witty teenage character in this novel. The book follows one school year in the life of Junior, a fourteen-year-old boy living with his family on the Spokane Indian Reservation near Wellpinit, Washington.

It is told in a diary style, moving from the start of the school year, through the major holidays, and ending with the beginning of summer. It includes both Junior's written record of his life and his cartoon drawings, some of them comically commenting on his situations, and others more seriously depicting important people in his life. The story, as a whole, is entertaining, funny, and is still able to discuss darker issues such as abuse, alcoholism, and poverty. Overall, I thought this novel was fantastic, and was an easy and casual read. I would recommend this book to practically anyone looking for a fun, entertaining story.
Reviewer Grade: 11 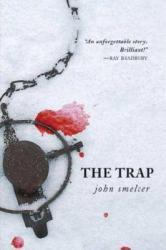 The Trap relates the story of an elderly native man named Albert Least-Weasel and his grandson, Johnny Least-Weasel. Albert is out in the Alaskan wilderness checking his traplines. When he doesn’t return on time and the temperature drops, Johnny and Albert’s wife begin to worry about the old man. Johnny believes he should go out and look for his grandfather, but others in the community advise him against this action, suggesting that his Grandfather is fine because he knows what he is doing. Johnny has mixed feelings between the advice of his elders in the community and his own instinct. The choice he makes will have a direct impact on the survival of his Grandfather.

However, The Trap is more than just a story about survival, it is also about the internal stories we tell ourselves as we face difficult situations and navigate challenges. The main characters reflect on their own story, memory and myth as they struggle through their individual conflicts. The author’s skillful use of learning tales and folklore deepens the experience of Albert and Johnny Least-Weasel while teaching the reader about being a part of the land and a culture that is defined by the world they live in. Alternating views between Johnny and his Grandfather allows the reader to experience the hardship of the Grandfather and feel the anxiety of Johnny. The Trap is a good read; I would recommend it to readers who enjoy survival and folklore.

Serafina's Stories shares the folklore of the southwest through the story telling template of Scheherazade's One Thousand and One Nights. Rudolfo Anaya focuses on the time of the Pueblo revolt against the Spanish Conquistadores. The captured Serafina weaves tales from both Pueblo and Spanish tradition that illuminate the similarites and differences of the peoples struggling to coexist in the same land.

Book Review: The Round House

When I heard about this book it had already won the National Book Award for Fiction. The description immediately intrigued me, and even after only a few pages I was engrossed. Louise Erdrich has rolled out a story so rich in emotion, character development, and place that it is almost impossible to stop thinking about the story after finishing it.

The story begins in 1988, with the attack of a woman living on a North Dakota reservation. The woman's reaction to what has happened to her, combined with the reactions of her husband Bazil and son Joe, bring the action to a deeply emotional place. Narrating the story is adult Joe, looking back at his 13 year old self with complete honesty and rawness. Expertly interwoven with details about Native American and Ojibwe culture and history, the reader feels deeply embedded in the lives of the characters as well as a profound sadness at what has come to pass on the original inhabitants of our great land.

This is not an easy book. There is lust, violence, rape, and sadness. Yet there is also strength, honor, and perseverance. And hope, most important of all.

Black Arts is the 7th book in the Jane Yellowrock series by Faith Hunter. Jane is a tall, native american skinwalker who began her career as a rogue vampire hunter, who got into the security business protecting high level vampire properties in Louisiana as a result of her expert skills. Those skills are greatly enhanced by her "Beast", the spirit of a puma she accidentally trapped when she was a child, turning into a symbiotic working relationship. Beast, by the way, provides excellent humor in her "voice", and terms for "stupid pack animals" and her direct impressions of how silly humans can be.

In this book, Jane is still trying to fit into working within a team, Yellowrock Securities, after working most of her life alone. In rapid succession Jane is asked to help her missing best friend, two "ladies of the night" from Katie's Ladies who have gone off and not returned, spearhead the security preparations for a high level vampire gathering while trying to keep herself together as her personal world crumbles around her.

Black Arts takes the reader on an edge-of-your-seat, roller coaster ride of tension and emotion so artfully done that at the end of the book the reader is literally stunned. I bought my copy, ask the library for one, you won't regret it.

I love any and all things Sherman Alexie, but this book really stands out among his work. "True Diary" is totally relatable to anyone who has ever felt like they didn't quite fit in.

Life on the Spokane Indian Reservation is tough for Junior. Not only is he small and easy to pick on, but he "was born with water on the brain" and has developed differently because of it. After Junior decides to transfer to a school off the reservation to try and find hope (which is completely unheard of), his life on the reservation becomes even harder. Illustrated with Junior’s witty cartoon sketches, this book is a quick read that makes you laugh in the midst of pain and brings to life the hardships of others.

A really engaging book about life on the reservation and what it's like to be Indian. A study of the Indian condition disguised as a teen fiction book. Well told and cleverly illustrated, this book gets two thumbs up.