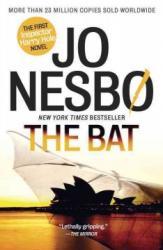 While this is the first book (1997) in the wildly popular Harry Hole series, it was actually the fourth translated into English. After reading it, I had assumed it was the first book and the publisher had been cheap -- poor translation and editing --- but hoped to piggy back on Stieg Larsson's success in the U.S.. I began reading the series with Harry Hole No. 9, The Phantom (2011) as a Why Not? purchase during a lengthy flight delay. I am thankful I did not start with The Bat or I might have missed out on one of my favorite Nordic Noir authors and a compelling character in Hole (prononced HO-Lay in Norwegian). The Bat gets off to an uncharacteristically slow start but later delivers the gritty thriller action Nesbo fans enjoy in later works. In the novel, the troubled police detective travels to Australia to investigate the murder of a Norwegian, then discovers and solves a series of homicides while running amok of local authorities eager to send him back to Oslo. If you are a series reader who wants to start at the beginning, then read The Bat. But don't feel bad if you start with Cockroaches (1998) or even The Redbreast (2000), the third Hole book, which won The Glass Key award for best Nordic crime novel.