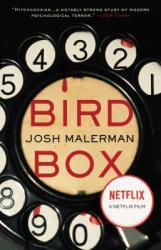 Imagine, you are a mom who has had to raise her two kids in a world where going outside was a major undertaking. No! This world is not filled with the usual “monstrous suspects” you come to expect in horror novels, vampires, werewolves etc.. this evil is unseen and unknown. It can’t be known, for you see, the moment any person glimpses it, this “evil” drives them to unspeakable violence and shortly after, their own death. The world didn’t used to be like this, it used to be normal but since “the evil” infested our world, things have never been the same. This evil leaves no survivors, and no one can stop it because no one can see it. It simply is unbeatable.

Malorie and her two children live in this world where evil can ravage anyone if you were just to step outside. To protect her and her children she raises them and teaches herself, to live life almost completely blind with a blindfold on most of the time. They do the best they can, holed up in their home trying to survive. One day through their meager means of communication Mallorie hears of this place 20 miles downriver where her and her family might be safe. But only if they can get there. Malorie and her kids, soon after, set out on a harrowing and terrifying journey downriver, all while wearing blindfolds, that will test them in ways they couldn’t have imagine.

Mallerman creates a horrifying and terrifying experience for readers that will leave them continually guessing. The strength of this story is also what makes it the best kind of horror. It’s unknowable and theirs a mystery around every corner. It could be something that could turn out to be a monster or something that could help the hero’s on their journey. The tense and creepy atmosphere Mallerman creates from the character’s surroundings also adds to the overall terrifying and mysterious aura of the story. Add to this that the evil so talked about throughout the book, is never actually revealed. Mallerman does a brilliant job of revealing some things but not everything leaving the readers imagination to make up the rest. And that is the strength of this book really, it turns the readers mind against them. Highly original and so creepy this book is a solid five stars. Pick up this intense terrifying psychological horror story today. And check out the movie coming to Netflix this December. I promise you, you won’t regret it!