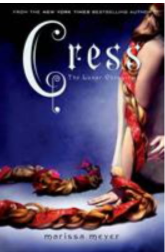 Anyone who has spent a considerable amount of time with me will know that one of my top three favorite movies is Tangled (2010). It then comes as no surprise to me that the third book in the Lunar Chronicles series that adapts the Rapunzel fairy tale into this sci-fi retelling would be my favorite of the set. It wasn't until I was reading original fairy tales to my daughter that I realized how close Cress came to representing the story it was based on instead of just relying on the familiar accouterments of the fairy tale.

While I didn't appreciate as much of the split storylines in Scarlet , I felt they improved the greater story arc of the whole series here. Cress explored much of the inner workings of the antagonist faction of Lunars that had been missing up until this point of the series. As such, I was able to gain a greater emotional attachment to the rag-tag group of rebels. It also helped that there was clear character growth in some of the minor characters like Carswell Thorne and Cress through the challenges they had to overcome.

Perhaps the best reason this was my favorite book of the Lunar Chronicles series is that it truly was building toward the climax of the series as a whole. Watching all the different pieces fall into place to set up the final book of the series was what had me hooked on this story all the way through. And sure, it still had that "teenage girl" quality to its prose, but at least it helped make the characters realistic—even if it was to adhere to the tropes of the Young Adult genre.

The sci-fi Rapunzel retelling I didn't know I needed, I give Cress 4.5 stars out of 5.