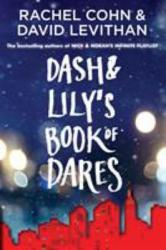 Dash & Lily’s Book of Dares, co-authored by Rachel Cohn and David Levithan, is a lighthearted romance set at Christmastime. When Lily, a spunky nerd, leaves a red notebook filled with mysterious clues at the Strand in New York City, an unexpected relationship begins. Her notebook is found by Dash, a cynic who detests Christmas, and thus begins a montage of absurd dares as the red notebook is passed back and forth around New York City by the two teenagers and their strategically-placed relatives. Along the way, Dash and Lily come to believe they love each other, though they’ve never set eyes on each other before.

This book lacks a stable plot and character development. Lily’s character is unbearably obnoxious and immature, while Dash’s cynicism is over-the-top and irritating. Lily undergoes virtually no change through the duration of the book; however, Dash does open up and become slightly less self-absorbed. The authors’ excessive use of big, flowery language did not fit the characters. It seemed as though the authors believed this was necessary in order to portray Dash and Lily (mostly Dash) as intelligent and intellectual beyond their years, but I found it to be distracting and inappropriate for the context. The plot of this book was severely lacking. It was chaotic and disjointed, and never reached a strong climax. I was irritated with the unrealistic and completely bizarre parts, and disappointed when the ‘romance’ fell flat.

I understand that this book is meant to be fun and amusing, but it would have been much higher quality with likable characters and a coherent plot. I enjoyed the Christmas-y setting, but I believe the authors could’ve used New York City in a more impressive way for the dares. Only read this book if you’re in the mood for a fluffy, vapid story with no substance whatsoever. There are lots of Christmas romances out there, and I’m sure most are better than this one.