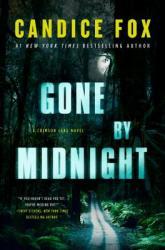 You may recognize Candice Fox as the coauthor of James Patterson’s Harriet Blue series, which includes titles like Never Never, Fifty Fifty, and Liar Liar. But with Gone by Midnight, the third book in her critically acclaimed Crimson Lake series, Fox has shown that her work deserves a place on every mystery lover’s shelf.

Like the previous two entries (Crimson Lake and Redemption Point), Gone by Midnight follows the wrongfully accused former policeman Ted Conkaffey and convicted killer Amanda Pharrell. In this latest outing, Ted and Amanda are
tasked with investigating the disappearance of 8-year-old Richie Farrow, who seemingly vanished without a trace from his hotel room. Ted and Amanda are two of crime fiction's most original private detectives with Ted’s love for his pet geese and Amanda’s penchant for rhyming and sponge cake. The banter between them peppers the prose with some genuinely hilarious moments.

In addition, the plot moves along at a brisk pace, with plenty of subplots to keep readers’ interest, including Ted’s relationship with his 2-year-old daughter and Amanda’s dealings with a local biker gang.

Anyone looking for a locked room mystery with a bit of Aussie flare should look no further than this thoroughly entertaining romp.