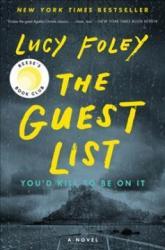 Those longing for an Agatha Christie-style yarn with red herrings that keep you guessing (incorrectly) will enjoy this mystery by Lucy Foley, author of The Hunting Party. This whodunit – by the end you may ask yourself who wouldn’t? – uses alternating points of views to reveal small, important details about each character. Those alternating chapters provide arguably understandable reasons to kill the eventual "victim," whose identity remains as murky until the end as the weather enveloping the isolated island off the Irish coast. Is the victim or murderer the Bridezilla? The reality TV star groom? The depressed bridesmaid? The jilted former lovers? Just how many of them are there? Or was it the jealous best friend? This modern tale evoking And Then There Were None and Murder on the Orient Express, may make you wonder if Christie, if she were alive, would have considered revenge porn as a motive for murder.