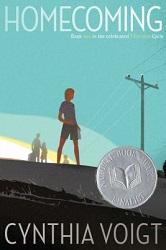 The main plot of Homecoming begins when Dicey, Maybeth, James, and Sammy Tillerman are abandoned by their mother at a mall parking lot in the town of Peewauket for unclear reasons. Their father had already left them previously, so after many financial difficulties they were forced to take a trip to receive aid from their Great Aunt Cilla in Bridgeport, Connecticut. They were left with limited money, not enough for a bus, to somehow make their way to Bridgeport. Led by 13-year-old sister Dicey, they must rely on their wits and survival skills to pave the way to their home. Upon arrival, they hit roadblocks. Despite this, they are able to make more money and discover the valuable information their grandmother lives in the small town of Crisfield, Maryland. They are unsure whether or not she is safe because of the instability that runs in the family. Without anything to lose, they decide to make their way to Crisfield in a second attempt to find their home.

I really enjoyed this book because of how they hooked me in really well by creating an atmosphere of desperation and mystery. For example, "why did their father leave?" or, "was their grandmother crazy?" The even better part about this is at the end of the book, it spun up the story very well for a book in a series. Most books in a series, in my opinion, leave you wanting too much at the end of a book. This one just left us with a few key questions left to answer. One of the characters that I felt like I related to, or rather that I hope to relate to, was a character named Windy. Windy was a student at college who took the Tillerman's in when they needed him the most. He was extremely kind towards them and better yet, he did it in a humble way. I hope I can be like this character so I can shine brightness into someone's life that needs it someday. I believe, even though the year is young, that this will be one of the best books I will have read this year. This book was an amazing tale, which I would recommend to anyone in eighth grade or higher.