Book Review: A Lesson Before Dying 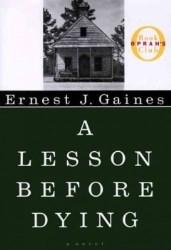 Two characters. Grant and Jefferson. Playing the roles of God in Jesus in society, as saviors. Jefferson is on death row for killing a man. Grant is a man who would rather have nothing to do with the sinner, Jefferson. However, Grant is persuaded to help Jefferson. The two men develop a crazy relationship. Grant’s job is to help Jefferson find his humanity again, after Jefferson’s astonishing defense in trial that compared him to a swine who wouldn’t know better than to kill a man, for he is just that dumb. This book teaches so many lessons, but most important how to be a hero for others. Read this book for nothing else than to get to Jefferson’s tragic journal in the end, where you should be prepared with tears and tissues, for your heart will break for these characters.