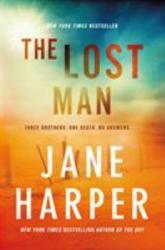 Fans of Jane Harper’s Aaron Falk series may be surprised to find that her latest outing is a standalone novel. But make no mistake: The Lost Man is every bit as riveting as The Dry and Force of Nature. It follows the Bright family as they’re forced to come to terms with a very personal loss. Before his death, Cameron was a charismatic and successful rancher and father of two, leading his family to wonder what could have possibly compelled him to venture into the unrelenting Outback alone.

Cameron’s younger brother Nathan is the main character and quite a sympathetic one at that. Divorced, disgraced, and utterly alone, Nathan stands in stark contrast to his older brother Cameron. His story will resonate with anyone who’s ever felt like they’ve hit rock bottom.

Though Harper is known for her mystery novels, the mystery surrounding Cameron’s death in some ways takes a backseat to the family dynamics at work before--and after--Cameron’s death. In other words, the characters, not the plot take center stage here.

Readers who enjoy expert characterization, vivid sensory descriptions, and realistic depictions of family drama will feel right at home with The Lost Man.