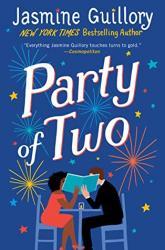 Olivia Munroe has just moved to LA, and finds herself frequenting her hotel's bar as she navigates the rental process in LA. On her last night in the hotel, she meets a sexy stranger at the bar. They have a cute interaction, but go their separate ways. Olivia is stunned when she realizes the sexy stranger was in fact Max Powell, a hotshot junior senator from CA. The two have another chance encounter, and this time continue to see each other. But is Olivia ready for life in the public eye?

This is my second Jasime Guillory book (The Wedding Party was my first), and I obviously liked the first enough to read this one, but I liked this one so much more! Olivia and Max were just such great characters, I fell in love with both of them pretty quickly. There's also some topical information about relations between the Black community and the police and politics at large, so that was super timely to read and adds an extra dimension to what would otherwise be a fluffy book. Really, aside from a couple of plot aspects that annoyed me personally, the only thing that bothered me was the lack of sex! Where is the sex?!?! There was soooooooo much sex in The Wedding Party that I expected a bunch here as well and was disappointed by it's absence, especially as I connected with these characters a little more.

I would generally recommend this to women's fiction readers, especially those who are looking for a slightly lighter way to read woke. 3.5 stars - it's somewhere in-between "I liked it" and "I really liked it" for me.

Thanks to Netgalley and Berkley Books for the eARC that I received in exchange for an honest review. Party of Two is available on 23 June.