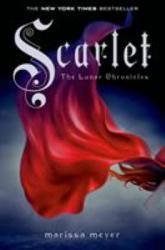 I continue to be impressed with Marissa Meyer's ability to weave a compelling narrative based on common fairy tale themes but set in a sci-fi framework. A continuation of the story that started in Cinder , Scarlet felt a little distracted as it added in elements from "Little Red Riding Hood" and split its time between the new characters—mainly Scarlet and Thorne—and advancing the plot of Cinder to its next logical step. As long as you realize this series centers around Cinder and her rise to the Lunar throne, this book should provide some great entertainment.

Perhaps what I enjoyed most about this book was how it seamlessly integrated with the lore already established in the previous volume while also being true to its source. Nothing strays too far from the themes of wolves/werewolves, so it's a bit of an obvious connection to make in a series that's titled the Lunar Chronicles. Still, the thought put into constructing a plausible plot from the pieces of a short fairy tale is something that must be applauded. Even so, Scarlet does have some weaknesses that have carried over from its predecessor.

The charm of the characters in this series comes from how realistic they seem. Granted, most of the characters are teenage girls, so there are many quirks that are amusing at first but become irritating over time. In particular, Scarlet seems quite stupid. Her logic is clearly flawed, and it's obvious to the reader that she's going about things all wrong for far too long until she finally "gets it." And—of course—she's going to be attracted to the "Wolf." The other new character, Thorne, seemed underdeveloped as well, but I'm sure we'll see more of him soon.

A somewhat distracted but still excellent follow-up to Cinder, I give Scarlet 3.5 stars out of 5.