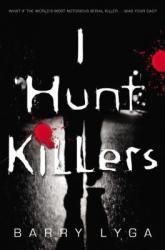 Jasper "Jazz" Dent is the son of the world's most notorious serial killer. After his father was captured, Jazz has just been trying to live like a usual 17 year old. But when a new killer appears who seems to be trying to mimic his father, Jazz knows that it's only a matter of time before people start to believe he's the new killer. So he decides to join the police in tracking down the murderer, not only to convince the town he isn't like his father, but himself. I Hunt Killers has a good mystery, with plenty of twists, and is difficult to predict. However, it isn't the mystery that makes the story addicting; it's Jazz. While some of the minor characters suffer from a lack of proper development, Jazz's interesting (and disturbed) mind makes this book difficult to put down. He is a morally gray character, incredibly messed up, but sympathetic. His fears of being a sociopath are not without reason. In the hands of a different writer, his struggles could be seen as heavy handed or melodramatic. But here, he is written as completely believable. The mystery is a good one, but it's the protagonist (the likes of which you rarely see in a young adult story) that makes this book really good.