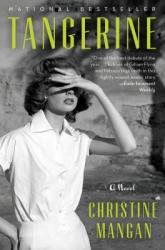 Tangerine by Christine Mangan portrays a toxic friendship between two former Bennington College roommates who are reunited in Tangier in 1956. One friend, Alice Shipley has been psychologically fragile since the childhood deaths of her parents in a house fire. She is married to John who does something secretive for "the government" in newly-independent Morocco. Lucy Mason, who connected with Alice through their shared orphanhood, has ditched a disappointing job and suddenly shown up at Alice’s door. She hopes to pry Alice from her dissatisfying marriage for a series of globe-trotting adventures they imagined in college. Both characters serve as flawed narrators -- Alice has a loose grip on reality while Lucy actively denies it.
The novel is at its best when Lucy tries to force a wedge between Alice and John, who is having an affair but depends on Alice's family trust to live comfortably. The romantic triangle turns this 2018 novel into a melodrama set against the intrigue of 1950s's North Africa. It's reminiscent of a slightly-hokey Hollywood movie of the same era. The book cover even features a woman of the period who could pass for actress Ingrid Bergman. That's the novel's charm (nostalgia) and its undoing (little original) in this enjoyable read.