Artists of the Knight: Conor Bourgal 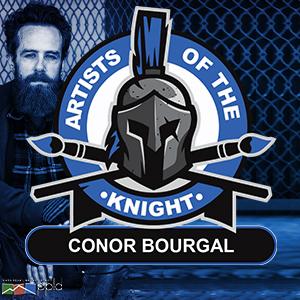 On intensely thematic albums that channel frontier mystics and old-world visionaries, Conor Bourgal turns a distinctly postmodern sensibility on traditional folk elements of authenticity, storytelling and the supernatural for an effect as present as it is haunting. The 2008 debut, Ghost of Red Mountain, garnered an enthusiastic reception from local audiences and was hailed by critics as “simultaneously stark and exquisitely expressive” (Santa Barbara Independent) and “natural and direct as a landscape” (Wear Headphones Tonight). Thanks in part to a grant from the Western States Arts Federation (WESTAF)’s prestigious IMTour initiative, the Changing Colors’ second album, Joan and the King (Blank Tape Records) gained wider exposure than ever before. These days, Conor is exploring electro-acoustic music and composing for string quartet.