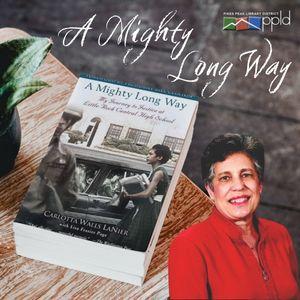 Join Pikes Peak Library District in celebration of Dr. Martin Luther King Jr. Day and welcome Carlotta Walls LaNier as she takes us through her journey as one of the Little Rock Nine. In 1957, at age 14, Mrs. LaNier and eight other students integrated Central High School in Little Rock, Arkansas. This act of courage became the catalyst for change in the American educational system. The Little Rock Nine, as they would eventually be called, became ‘foot soldiers’ for freedom. In 1999, members of Congress and former President Bill Clinton bestowed upon Mrs. LaNier and the other members of the Little Rock Nine the nation’s highest civilian award, the Congressional Gold Medal, for their sacrifice and contribution to the cause of equality.

Mrs. LaNier will share her story with us at the upcoming presentation, A Mighty Long Way, and introduce her new book A Mighty Long Way, My Journey to Justice, at Little Rock Central High. Please join us in-person or on the livestream. Registration is encouraged.